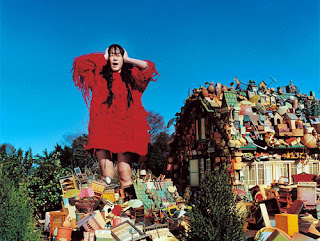 There was a time when renting wild import DVDs just didn't happen (unless you lived near Kim's Video or TLA rentals in NYC,and even then...) but now all sorts of neat releases pop up on Netflix, and while it takes me a while to work through them, some are worth pointing out. Here is one such example:

Wool 100% (Cinema Epoch)is a nice bit surrealist cinema, it's unorthodox approach is on display right from the opening credits. It tells the story of two elderly spinsters who live in a house covered by junk they have collected over the years. One day on a garpage picking outing they find a basket of rough, red wool and take it back to their Collier Brothers-esque lair. In the night it attracts a naked young woman who uses it to knit a really ugly sweater, she then collapses in despair screaming that she'll have to knit it all over again, leaving the sisters to cope with this unlikely chaos in their previously controlled and ordered world.

The junk especially is treated with great love and detail by the director. The sisters pour over garbage left on the street like jewelers over diamonds. They carefully catalogue all their finds in sketchbooks, complete with detailed drawings. The sisters themselves are artfully constructed. They dress in early Showa period fashion (1930's) one in western style the other in Japanese, their silver bob hair doos giving them the look of advertising art from the era. As a matter of fact, themselves, their house, their collections are so lovingly cultivated that it is almost heartbreaking to watch the knit obsessed little savage break it all up.

Gorgeously shot, edited and designed, Mai Tominga's fantasy is reminiscent of Jeunet and Caro's Delicatessen and City of Lost Children without being derivative. A good companion film to Nobuhiko Obayashi's (not released in the US) Hausu or underrated Higuchinsky's Uzumaki. Fantastic.
Posted by Unknown at 12:18 PM 2 comments: