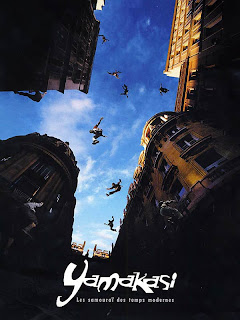 I'll admit it, I think Parkour is cool. No really. And yes, I watch the X-GAMES on TV sometimes and not just to laugh when some bleach-blond skate-rat wipes out on a mega-ramp. 2001 was early enough that Parkour hadn't yet become pedestrian enough to be a joke on the US version of the OFFICE, and YAMAKASI was made with that level of innocence. The film opens with a group of young men planning a campaign, shot in a manner that suggest bank robbery. It turns out to be a freerunning stunt. Of course. Directed by Ariel Zeitoun and Julien Seri and based on a scenario by Luc Besson, the plot is lightweight and the action fast-and-furious. Just what you'd expect. The stunts are certainly a precursor to later fare like BANLIEUE 13, which was better shot and better written. Zeitoun has gone on to be a full-fledged Besson prodigy, and YAMAKASI fits the template of Besson-produced action yarns. There's some nice cinematography thanks to Phillippe Piffeteau, who also shot the Oscar-winning short LE MOZART DES PICKPOCKETS back in 2006.

Be forewarned, despite loads of manly stunts, there is a kid-heavy subplot so treacly it'll make your teeth hurt. The urban but erstwhile heros are in it for the joy of the sport, not just to antagonize the police (the goof-ball villains of the story) and abuse public property. Even elderly neighbors feel moved to sympathy for these young punks who sport street names like "Mr. Music" and "Tango." They also do good deeds: "Baseball" stops a purse snatcher by throwing a can at the thief's head, major-league pitcher style, and they all come to the rescue of the local rugrats, one of whom ends up hospitalized.

But it's a Luc Besson Parkour film, you aren't watching it for the story, are you?
Posted by Unknown at 10:48 AM 2 comments:

Social Networking (and by that I mean the T-word)

I'm going to assume that anyone who is friends with Steve/Shock Cinema on Facebook knows I have a Facebook (non-movie-related for the most part) but I also have Twitter (#uselesstimekiller). I do, at times, talk about film there, especially if it is something that doesn't warrant an actual review (or, I intend to anyway).

Ok, I didn't Twitter about Salt, because I can't come up with 140 characters to say about it that someone else already hasn't. It was a very silly film with lots of action. You knew that after seeing a trailer for it, didn't you? (#youcanreallytellthiswaswrittenfortomcruise) And I didn't write about the first episode of An Idiot Abroad because I was so blotto on painkillers I don't remember a thing about it (#dentalwork).

In my grande attempt to make up for an entire year of NOT writing for Shock Cinema, I am now making a real effort to post here and at Twitter. So, come follow. I guess. If that's your thing. #doyoureallywanttoreadmyrandomthoughts?
Posted by Unknown at 12:59 AM No comments:

I've spent the last several weeks fiddling around with my brand new computer and, now that I have 15x the storage capacity of my old Mac, decided to set up a Shock Cinema Magazine YouTube channel for some of my favorite old TV and movie clips... I'll be uploading add'l videos as time permits, as well as clips from films that I've reviewed in the pages of SHOCK CINEMA Magazine.

Posted by Shock Cinema (Steven Puchalski) at 3:42 AM 1 comment: 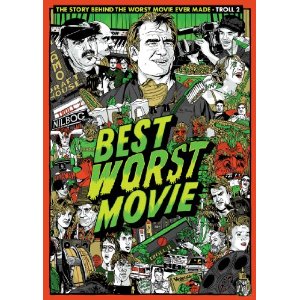 I haven’t seen TROLL 2. Have you? I’ve seen enough of it, though, to know I can live the entire rest of my life without having to sit through it. On the other hand, BEST WORST MOVIE, the documentary made about TROLL 2, its cast and its fans is worth the watch. Directed by the now-grown child star of TROLL 2, Michael Stephenson, it focuses mainly on Dentist George Hardy, who once wanted to be an actor, went to an audition, and ended up in a truly poor film. He then went on and had a career in said dentistry without anyone knowing his past. Well, until Stephenson showed up with a camera. Hardy is a likable ham. He embraces the fandom of this regrettable film with gusto and always seems to be in on the joke. Well, until he starts doing the autograph circuit and discovers what an ugly, humiliating scene it is. Actually, I think the thing I enjoyed most was his arc from oh-my-god-I’m-a-cult-celebrity to oh-my-god-these-people-don’t-know-who-I-am-and-they-creep-me-out at a horror convention. Besides Hardy, we also get TROLL 2 fans who hold viewing parties (including one at the UPRIGHT CITIZEN’S BRIGADE in my own, dear, home town of NYC), the narcissistic director who STILL thinks he’s made a great piece of art, and a home visit with actress Margo Prey that is haunting to say the least. Stephenson really holds the whole thing together with the right strokes of humor, honest affection, and disgust, going as far as reenacting scenes with cast members and interspersing them with moments from TROLL 2. Far better than I expected going in, this is my Netflix recommendation of the moment.
Posted by Unknown at 8:04 PM No comments: