I've been MIA recently, I know. Hey, I have a day job, I help out with the physical production of Shock Cinema Magazine, and I'm writing a book. Three if you count the ones I'm shelving or planning. I also have stacks of movies to watch! That keeps me away from the blog even when there is important news like the Tokyo Zombie DVD getting a US release at last (which I found out about AGES ago and never bothered to post- bad obscure film fan, no cookie). There are a number of films that have seen legit releases that I actually liked, and I'm not just talking documentaries about grim and depressing subject matter. Oh no, these are full on dramatic films about grim and depressing subject matter! 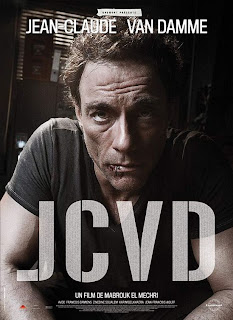 First off is JCVD: Jean Claude Van Damme. What ever you think of the guy, feisty B-movie star who introduced a generation of stoned teen boys to the virtues of Hong Kong directors like Hark Tsui and John Woo or annoying Belgian martial arts moron who can't deliver a line -- JCVD will change that. This visually stunning, exciting, thoughtful and funny french language film was shot on a relatively low budget, but makes good use of the streets of Brussels and it's now-slightly-weathered leading man. Referencing Van Damme's actual career, the writers (Frederic Benudis, Mabrouk El Merchri- who also directed) pulled no punches in showing just what the life of an over-the-hill action man might entail. The opening scene (a stunning one shot) has Van Damme work his way through a back lot war zone, karate chopping and faux-face-kicking soldier after soldier, only to have prop failures and a bored director foil his performance in this film-within-a-film. This leads to the heart of the story, Van Damme's American ex-wife is suing him for custody of his estranged tween daughter (very close to real life from my understanding), his lawyers want money, his agent can't land him a decent role, so he's on his way back to Belgium a broken man. Of course when he enters a local post office, should you be surprised when gun shots ring out and he tells the police he's holding the unlucky people inside for ransom? Anymore would give too much of the plot away, but it includes a monologue delivered and written by Van Damme that would break the heart of even the most blase mumbblecore devote, and a refreshingly realistic twist to the finale. Make sure you stick to the subtitled track, the dubbed cut is painful to say the least. Mind you, I have a history of pushing artsy French action films, but this time the critics agree. 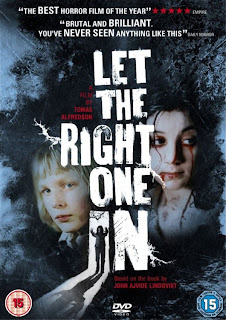 It's not often that a film adaptation drives me to go buy a popular novel and promptly get hooked -- Night Watch, Hellboy, and now Let the Right One In are the only examples I can think of. Let the Right One in hit the festival circuit around the same time Twilight opened in theaters, but the two films share only the briefest of vampire trappings. While Twilight's picture-perfect teen blood suckers try to tame their (blood)lust and play super human baseball for fun, Let the Right One In's sole creature of the night is an unkempt twelve year old girl who is more passionate about solving Rubix Cubes than in practicing her attractive pout. Set in the early 80's in a Suburb of Stockholm (think what Jersey is to NYC) young Oskar is a middle school looser, his classmates tease and bully him horribly, the teachers ignore his existence. His clingy mother and caring but dysfunctional, estranged father certainly don't help. While Oskar dreams of revenge, he notices the new neighbors who have moved in next door in their generic, middle class housing development are not quite normal. They arrived by cab in the dark of night, their windows are covered with blankets, neither "father" Hakan nor "daughter" Eli are often seen outside and certainly aren't friendly when they are. Hakan seems to engage in the activities of a serial killer (though he bungles most everything) and Eli stalks Oskar in the playground at night, undaunted by the icy cold of the Swedish winter, and continues to pursue him even after claiming they "can't be friends." In time, Oskar befriends Eli, only to have her reveal that she is a vampire of sorts, never getting older and requiring the fresh blood of human beings to survive, she also can not enter a home without being asked (the director has no qualms about graphically illustrating just what happens if she tries). There is a romance of sorts between Eli and Oskar, though in the least romantic sense, and it's hard to say if Eli is lonely or reserving Oskar for a snack. Their story is told on the back drop of a society which projects a clean image but is decrepit underneath -- in this lovely suburban lie the school children are monsters who attempt to drown Oskar in an icy lake during a field trip, the neighbors are derelict drunks, parents are useless. Beautifully directed and shot by Thomas Alfredson with well placed visual effects, this grim, violent, piercing adaptation streamlines J. A. Lindqvist's (also the screenwriter) brick of novel while still retaining the essence. I have a feeling this one will stay with me for a while. 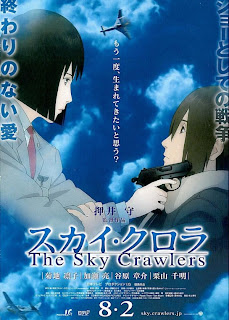 Fan Favorite Mamoru Oshii's latest venture, Sky Crawlers, didn't attract the sort of worshipful response his animated outings usually garner. Slow paced, almost mundane in its approach to its not-quite sci fi environment, I can understand why. However, that is not the issue I had. While the rambling plot with its complex themes and nostalgic aura kept me interested, I found the photo-realistic CGI jarring in contrasts to the delicate, etherial 2D animation. In a world without war Yuichi is a perpetual youth, a pilot who flies fake missions for television ratings to keep the minds of a bored public off the threat of real war. Dubbed Kildren, these genetically engineered entertainers live empty lives, filling in the time between dogfights with smoking, drinking and the occasional outing with a prostitute. Not much seems to bother Yuichi about this, even when he is stationed at a new base his only real curiosity is what happened to the owner of the plane he's been assigned to. The thing is, there is plenty of of weird going on -- Yuichi's new commander looks a bit like a Kildren herself, she tends toward odd ticks like picking up discarded matches and telling her own daughter they are "sisters" to explain away the age discrepancy. The other pilots are odd too, from the jaded OCD, paper reading, albino to Yuichi's hard drinking roommate. And why does everyone keep commenting on the disappearance of Jinro, the pilot Yuichi has replaced? Based on the book by Hiroshi Mori, Oishii's presence is felt throughout, right down to the trademark hound dog hanging around the airplane hanger. CGI aside, this is one hell of a picture. Anime meets French Bande Dessine of the Corto Maltse ilk.
Posted by Unknown at 6:31 PM 1 comment: 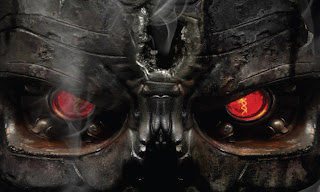 Full disclosure: The Terminator trilogy has never interested me. I really don’t know why but if I have to guess, it probably has something to do with the existence of Eddie Furlong. Yes, I know he was only in T2 (Terminator Two) but his smug presence still lingers over the franchise like a droopy eyed rain cloud.

It wasn’t until Christian Bale’s notorious meltdown on the set of Terminator Salvation that I started to realize the full potential of these Terminator films. Bale’s little blooper combined two things I demand to see in every movie: horrible assholes screaming their lungs out and very intense discussions about lighting. I was looking forward to a film in which Bale wanders around an apocalyptic hell-scape verbally assaulting any android that’s stupid enough to get his latte order wrong or accidentally give him full eye contact. Unfortunately, Terminator Salvation turned out to be nothing at all like I expected. But once I got over my initial disappointment the film turned out to be an entertaining summer movie. In fact, it’s far better than any movie directed by McG should be.

Stumbling awkwardly out of the gate, Terminator Salvation opens with a decidedly odd prologue involving a death row inmate named Marcus Wright (Sam Worthington) who donates his body to a sinister scientist (Helena Bonham Carter, inexplicably) but not before he mocks her cancer and makes out with her. Yeah. Sure. These things happen I guess. At any rate, the story picks up several years in the future; Skynet has destroyed most of humanity in a nuclear war. As the previous films have predicted, an adult John Connor must lead the human resistance against the machines. This time, however, the machines plan on killing John’s father (Anton Yelchin) who for some reason or another is a teenager that’s stuck in the current apocalyptic timeline. Complicating matters is the strange reappearance of Marcus who isn’t sure where he is, why he’s still alive or what role he plays in the resistance.

Make no mistake about it Terminator Salvation is a big dumb action movie and like most big dumb action movies the film is engaging as long as it sticks to its frenetic set-pieces. Once it strays into more subtle character based territory the film stumbles badly (particularly any scene that involves the uninteresting and bland Marcus character). The film also seems to struggle with the pretense that it’s something more than it actually is. There are a handful of distasteful and ill-advised allusions to the Holocaust that are completely out of place. Especially considering that they’re preceded by footage of a giant robot with a gun for a head as it launches motorcycles out of its shins. Terminator Salvation also boasts some hilariously clumsy callbacks to the early Terminator films. Case in point: there’s a scene where Bale announces he’ll “be back.” The moment is handled so awkwardly I’m surprised he didn’t wink at the camera and shout “wocka wocka."

At this point, I realize that it sounds like I hated this movie. I didn’t. In fact I really liked it. It’s fast paced, some of the performances are strong and the cinematography has an unsettling washed out quality. It may not be a good movie but it’s consistently entertaining and for a summer movie that’s good enough. Oh and one final note, I also really liked Indiana Jones and the Kingdom of the Crystal Skull so understand that this recommendation also functions as a warning.