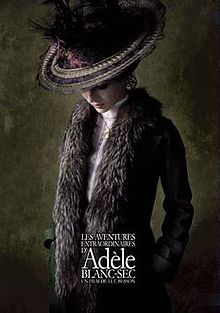 
I love French comics (bande dessinée), and I'm something of a Luc Besson fan, even if I've found his more recent offerings a bit... lackluster. ANGEL-A was watchable, but not great. ARTHUR AND THE INVISIBLES was a mess (but still spawned two sequels, go figure). THE MESSENGER was nearly unwatchable, and I feel I'm giving it more credit than it deserves just by saying that. That makes LES AVENTURES EXTRAORDINAIRES D'ADÈLE BLANC-SEC his best effort since 1997's THE FIFTH ELEMENT. Certainly, ADÈLE has a lot in common with THE FIFTH ELEMENT. Both are snappily filmed, effects-heavy action fare with comedy overtones. Both feature a former model as the leading lady and have a loving approach to the vast culture of comics in France. Based on the Jacques Tardi series of the same name and set in 1911, Louise Bourgoin (LE PETIT NICOLAS) plays the title character of Adèle, a reporter of some fame who has gone AWOL from her most recent assignment and skipped Peru for tomb raiding in Egypt. Meanwhile in Paris, doctor of anthropology Esperandieu (Jacky Nercessian) has developed a mystical power and used it to resurrect a Pterodactyl from an egg in the Musée du Louvre. The Pterodactyl menaces Paris, killing officials and even scaring the president in his parlor. A bumbling detective is put on the case and Giles Lellouche (MESRINE: KILLER INSTINCT) plays Caponi with great zeal, whether eating or sleeping or looking proud while missing the facts. Jean-Paul Rouve plays Saint-Hubert, a big game hunter brought in to track down the beast, while quiet museum curator Andrej Zborowski (Nicolas Giraud) sways between pining for Adèle and trying to hide the Jurassic-era creature. Adèle returns from Egypt with the mummy of Rameses II's doctor, in the hopes Esperandieu can resurrect it and help save Adèle's brain-dead twin sister. What more can I say? Antics ensue, Adèle smart-talks everyone from camels to police into doing as she says, mummies drink tea and it wraps up neatly while leaving the door open for more adventures.

Besson plays fast and loose with Tardi's original material, ditching much of the cynicism and upping the humor. While Adèle of the books is more of an anti-hero (a criminal even), here she is a celebrity, easily able to get audience with the president of France -- only the moronic police lack respect for her. As expected from Besson and his crew, the camerawork is impeccable (cinematographer Thierry Arbogast has shot every Besson picture since LE FEMME NIKITA), and the recreation of pre-WWI France is stunning. The majority of the actors are delightfully made-up to mimic Tardi's grotesque cast of characters and the Egyptian scenes are lovingly detailed. The performances are impressive, and Bourgoin is a charming and compelling lead. Feel free to play 'Is that an in-joke?' as the film is packed with references to, among other things, Besson's other films. Also, I would guess that Mathieu Amalric's brief (and thoroughly unrecognizable) appearance as a deranged supervillain can only mean a non-Besson directed sequel in the works.

By the way, the lovely ad slick I used for the graphic is from the Shock Cinema Chirashi archive. Chirashi are small film posters distributed in Japan to promote new releases.
Posted by Unknown at 5:30 PM No comments: