Rick Sullivan and the GORE GAZETTE

Without question, Rick Sullivan's GORE GAZETTE was one of the greatest grindhouse-film 'zines of all time. Throughout the '80s and early-'90s -- back when Times Square was still a beloved cesspool -- Rich cranked out 110 issues of his hilarious newsletter. I was one of its many fans, and if not for Rick Sullivan, there might never have been a SLIMETIME or SHOCK CINEMA.

Sure, I was writing film reviews long before I picked up an issue of the GORE GAZETTE -- during my college days I was Film Coordinator for Syracuse University's University Union Cinemas, and wound up writing hundreds of reviews for films that were being shown on campus -- but it wasn't until I read several issues of the amazing GORE GAZETTE that I decided to try out this self-publishing nonsense for myself (and just like Rick, I printed it at work, using office copy machines and supplies). Alas, Rick closed up shop after his 110th issue, but I still hear from the guy on occasion (often with a photo-Xmas card of him and his family) and he seems to be doing quite well.

Shifting to the present day, Mike Decker at Just for the Hell of It has recently devoted a lengthy section of his website to the GORE GAZETTE. We get 10 pages of classic Rick Sullivan opinions and rants, along with loads of nostalgic scans -- including Rick's premiere issue, numerous G.G. covers, plus several flyers for his riotous Gore Gazette Film Series.

Click on the image below -- the cover of G.G. #108 (the issue contained a hilarious editorial that ripped into FILM THREAT-pinhead Chris Gore for incorrectly saying that the GORE GAZETTE was run by li'l ol' me, hence its "Steve Puchalski takes over the G.G.?" headline) -- and the link will take you directly to The Best (& Worst) of the GORE GAZETTE. 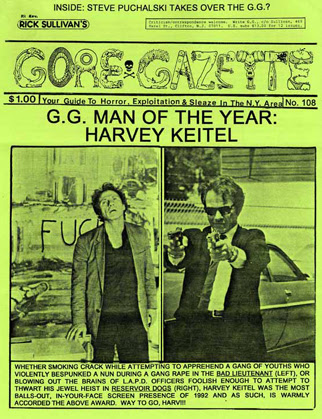 Posted by Shock Cinema (Steven Puchalski) at 12:03 AM 4 comments:

Brutarian magazine is always a good read, so imagine my surprise when I saw not only a review of Shock Cinema #32 but the cover reproduced full sized! And Brutarian had lovely things to say about it, too, from praise of Steve's writing, to our choice of films and interviews. The only criticism -- well, as they point out, we DID ask -- the other film reviewers! And despite being one of those other film reviewers (I'm not an epigone, so I must be one of the feckless pendants), I still think the review was great and really look forward to future issues. These old school zinesters do not seem to have an official website, but click you can on their cover to visit their MySpace page...