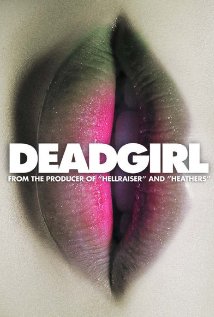 In many horror movies, the sequence of events is kicked off by teenagers doing stupid things, and DEADGIRL is no different. Two scruffy high school losers skip classes to drink warm beer and break windows at an abandoned mental hospital. After getting chased by a stray doberman, Rickie and JT find themselves lost underground in the bowls of "The Nut House." Prying open a rusted door in the hopes of finding a way out, they discover a naked, unconscious woman bound and cuffed to a mattress, with a sheet of plastic covering her. The boys quarrel over calling the police (Rickie) or "keeping her" (JT) and part ways, only to have JT resurface a few hours later to drag Rickie back to the hospital. There he confesses he killed the girl, only to have her wake up, again and again. JT wants to use her as a sex slave, Rickie isn't convinced, but agrees to go along with it if JT keeps his involvement, and her, a secret. Even with this new supernatural element, Rickie's life is pretty grim: His mother's alcoholic boyfriend is staying over indefinitely, he has a crush on a girl at school who won't give him the time of day, his teachers are smug, his friends are lame, his masturbatory fantasies are interrupted by images of the dead girl (Jenny Spain, who looks like vaguely like Bjork if you stretched her taller by half-a-foot and stained her teeth yellow) and the jocks at his school are acting like, well, jocks. While Rickie wrestles with his inner demons, JT has started to bring other scummy friends down to fuck this zombie sex doll -- justifying their behavior by insisting she is not a real person (being dead). Only Rickie still refuses to join in, but he doesn't go to the police either. Instead he tries to set her free... and then things really get nasty. Nicely handled and well shot, by all rights DEADGIRL should have dissolved into adolescent silliness or outright sleaze by the first half hour, considering the subject matter. Instead Directors Marcel Sarmiento and Gadi Harel (neither with a notable project on their scant resumes) transcend the obvious pitfalls and deliver a quiet, mean, sometimes funny film about teen angst, morality, mortality, and sex. The relatively young cast all rise to occasion: Shiloh Fernandez (who gave a solid performance in RED) anchors the rest of the actors and is never too pretty nor too emo to lose the viewer's attention. Noah Segan's JT plays a stupid hick and demented maniac with grace. Even Jenny Spain as the Deadgirl treats writhing and gnashing of teeth like a serious role. I admit that DEADGIRL well exceeded my (probably low) expectations, and reminded me why I like a good B-horror film in the first place. If only they were not so few and far between.
www.deadgirlmovie.com
Posted by Unknown at 6:16 PM