For those of you who haven't heard me bitch about the endless pains of writing and drawing a graphic novel or been privy to my Sudden Death Overtime page counts, I would like to point out that one cure for the boredom of filling in large areas of negative space with black ink is a well-made documentary film. Lucky for me there are a number of them out there and readily available via cable TV and Netflix. SHOCK CINEMA has always included documentary film in its review sections, so in that spirit here's what's been on the menu for the past summer months and what I think of them: 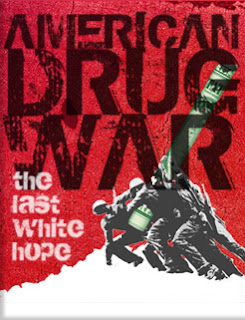 First up is Kevin Booth's AMERICAN DRUG WAR -- now while I prefer the filmmaker to be as impartial as possible while dealing with controversial subject matter, I do think this pro-decriminalzation flick presents the issues well. The prime point of interest though is some great footage -- both archive and original -- of the state of drug use in the USA, past government action, good interviews with both pro and con subjects, and an amusing comparison between Los Angeles and Amsterdam. Ex-FEAR FACTOR host Joe Rogan makes an appearance more to support the cause then to offer any useful insight, but it's still nice to see him on screen. For the record, I am NOT a recreational drug user, having learned in my early teens that pot makes me dizzy and prone to vomiting, a reaction I also seem to have to Vicodin... 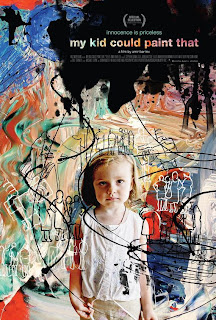 Amir Bar Lev's MY KID COULD PAINT THAT is based on the controversy presented by 60 MINUTES over whether or not a four-year-old child had created the abstract paintings her parents were selling for thousands of dollars through galleries across the country. In this case, while the filmmaker does make clear that his own feelings about the art changed in the course of filming, the tone is fairly impartial and presents both the views of the family and their retractors. A lot of the details of the story may go over your head or seem pointless if you do not have a background in the arts or if you lack interest in the fine art industry, but for me, especially the visual comparisons of the "real" paintings done on camera by diminutive Marla Ormstead and other works-in-question were all the evidence necessary, no other commentary needed. The best comment in the film comes from photo-realistic painter/gallery owner Anthony Brunelli, who stated that he arranged the girl's first show in order to say something about abstract art and the mess that followed illustrates his point well. 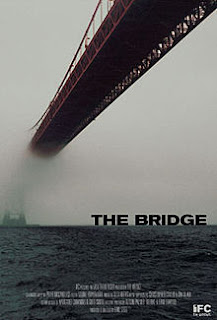 Eric Steel's THE BRIDGE is by far the most depressing documentary I've sat through in a long time, but at the same time absolutely engrossing. Filmed over the course of a year, and covering a fair slice of the twenty four people who plummeted to their deaths in 2004, he delves into the history of the Golden Gate bridge and the morbid fascination people seem to have with it. An overwhelming amount of the subjects investigated in this film seem to have had some form of mental illness and sometimes a history of suicide, but that does not lessen or prepare the viewer for the shocking footage of jumpers. Likewise interesting is the almost oblivious attitude of tourists and locals on the bridge (as exhibited by a photographer-cum-lifesaver who realized at the last moment the stranger he was snapping pics of was about to jump -- until he dragged her back over the railing). Beautifully shot, this original chronicle of a historically significant landmark and its grim allure stays with you long after the credits roll.

SURFWISE is the story of an idealistic man who decided to drop out of conventional society and surf for the rest of his life instead. The conflict comes into play when you see how he relentlessly dragged his family along with him and expected them to share his alternative lifestyle. Nine children and two adults in a trailer, touring the land for the best surfing available is exactly as claustrophobic as it sounds, and the array of offspring bear the scars from it. While it's hard not to respect the man who brought surf culture to Israel and stuck so firmly with his dream, it is hard to believe he did the right thing. Jonathan Paskowitz and his family present themselves honestly and forthright, warts and angel wings, in this beautifully shot film by director Doug Pray. Excellent surfing footage both vintage and present day tops off the biography sections and kept me glued to the screen. 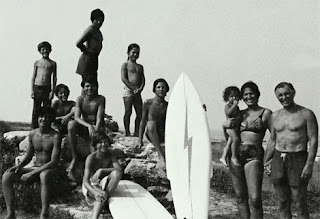 Because I will happily watch surfing or skateboarding in almost any form, I also sat down with BRA BOYS recently. While it does cover a good deal of the history of working-class surf-culture in Australia, the heart of the story is a self-defense shooting and the inevitable release from jail of pro surfer Koby Abberton (younger brother of the director Sunny). Because of the family investment, the narrative breaks down part way into unnecessary, heavyhanded pathos that take the viewer out of the experience of the film overall. However, that aside, it is an excellent overview of a pop culture phenomenon, and a statement about "localism" and the attempts by the government to prevent it from taking hold. Loaded with breathtaking surf footage, shocking candid videography of fights, parties and family reunions, I turned off the DVD player with a mixed bag of feelings for these fierce, if misguided punks. While the film ends with a statement of unity among surfers of many ethnic backgrounds, it is hard not to notice the lack of female surfers, or even any woman of importance or gravity in the lives of these men save their grandmother who housed them and encouraged them into careers as pro-surfers. Watching this, it's clear how Australia could produce disturbing social commentary like ROMPER STOMPER and BLUE MURDER. As an added plus, the soundtrack features an exciting array of local bands including several stunning tracks by The Camels. Russell Crowe narrates. 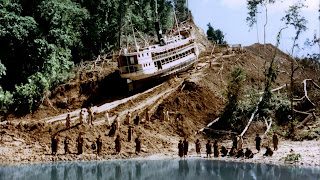 Last but not least, I happened upon BURDEN OF DREAMS: THE MAKING OF FITZCARRALDO on IFC the other day. While I've seen it before, and likewise seen the 1982 film it is about, it never fails to strike me just how much people suffer for their vision, suffer for the vision of someone else, and how dedicated people can be in the face of bodily harm and discomfort. Werner Herzog's reputation as an auteur and a madman is well presented and shot with exacting and heartbreaking cinematography. Not to mention that there's nothing like seeing the crew drinking hard liquor on set while patching up each other's wounds. While I do think it is vital to see FITZCARALDO first for the full impact and irony of the events of it's filming, Les Blank's BURDEN OF DREAMS stands alone as a testament to art.


Note: Many of these films have incredibly annoying Flash sites, but I offer you the links anyway: www.americandrugwar.com/
www.sonyclassics.com/mykidcouldpaintthat/main.html
www.thebridge-themovie.com/
http://www.surfwisefilm.com/
Posted by Unknown at 9:31 AM 1 comment: