In my editorial for the upcoming SHOCK CINEMA #36 (which, FYI, is going onto the printing presses on Monday, 1/19, and will hopefully start shipping out to subscribers and stores on 1/28), I discuss all of the notable people who've passed away in the last few months. Unfortunately, that list just continues to grow in this new year. In 2009, we've already lost RAT PFINK A BOO BOO director Ray Dennis Steckler and the versatile Edmund Purdom (who was interviewed for SHOCK CINEMA by Harvey J. Chartrand back in #24) -- in addition to one of my all-time favorite actors, Patrick McGoohan, who died on January 13 at the age of 80.

From early screen roles in the gritty trucker-drama HELL DRIVERS and the Othello-inspired jazz-tale ALL NIGHT LONG, to later gigs such as David Cronenberg's SCANNERS and Alexis Kanner's under-appreciated hostage-drama KINGS AND DESPERATE MEN, McGoohan continually proved that he was one of the coolest men alive. He won two Emmys for his scene-stealing guest gigs on COLUMBO, starred in the pre-007 secret agent series DANGER MAN, and was the guiding force behind one of the greatest programs ever made, THE PRISONER. Although McGoohan's career was certainly successful, he never became the superstar that Hollywood had envisioned -- as they promoted him in this rather silly, March 1961 newspaper advertisement, teasing the upcoming premiere of DANGER MAN.

My first encounter with McGoohan's work was when 1962's THE SCARECROW OF ROMNEY MARSH played on THE WONDERFUL WORLD OF DISNEY. I was only a little tyke, but my parents bought me the 45 lp of its creepy title theme and I played that record until it almost wore out (almost as much I played The Beatles' single for TWIST AND SHOUT, which was given to me by a much-cooler older cousin -- since my tone-deaf parents were more into Lawrence Welk, Boots Randolph and Ray Conniff). Of course, I didn't know who the heck McGoohan was, but the movie itself was unforgettable -- exciting, scary, dramatic, and nothing like the crapola that Disney foists onto the public nowadays.

Many years later, while attending Syracuse University, I discovered McGoohan's revolutionary 1967 TV-series THE PRISONER, (if you've never seen it, shame on you). Alas, in this pre-VCR era, it was almost impossible to see the show, since it hadn't been broadcast on US stations in several years. Luckily, I just happened to be the Film Coordinator for one of the largest campus film programs in the country, so the answer seemed quite logical -- I'd rent 16mm prints of the series, straight from the show's original distributor ITC, and run an all-night PRISONER Festival during the Fall 1981 semester. It only ran 17 episodes -- which, minus all of those pesky commercials, boiled down to 'only' 14 hours. It ran from early-Saturday-evening to late-Sunday-morning, and a surprisingly-large crowd of fanatics stuck it out from beginning to grueling end.

A few years later, I had a chance to see McGoohan on-stage during his 1985 Broadway stint in Hugh Whitemore's PACK OF LIES. While autographing the Xeroxed program booklet for our PRISONER Festival, he remarked: "You watched all of them... In one night? That's insane." No, it was simply our small tribute to his mind-blowing series.

Oh, and if anyone can dig up a copy of McGoohan's big-screen directorial debut, the 1974 Richie Havens rock-musical CATCH MY SOUL, please, please drop me a line. I've wanted to review it in SHOCK CINEMA for nearly 20 years, but the film is completely M.I.A. -- and I'm still kicking myself for not renting it back in my University Union days, when New Line Cinema had a non-theatrical 16mm print for college screenings (under the title SANTA FE SATAN).
Posted by Shock Cinema (Steven Puchalski) at 4:31 AM 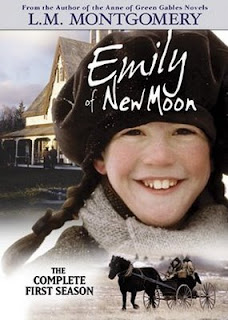 Emily of New Moon, Season 1: This 1998, Canadian made television series followed on the heels of the successful Anne of Green Gables production, perhaps a bit misguidedly, as Emily was never as popular a series of novels as Anne. It is easy to compare the two properties, what with their vast similarities (Prince Edward Island, Orphans, aspiring writers), and Emily makes its best attempt to fill Anne's massive shoes. Michael Moriarty guests as Emily's doomed romantic of a father early on, and the cast is filled out in his absence with a stunning array of character actors including Phyllis Diller(!?!). The producers had thought it wise, apparently, to cast the younger version of sickly, brunette, grim Emily of the books with a rosy cheeked blond who grips her pet kitten while smiling sweetly at her mother's ghost. As the series progresses, this is corrected with Martha McIsaac's (of Superbad fame) black braids, a detail even a recent anime adaptation managed to get right from the start. Despite the brighter, 'American Girl' treatment, Emily of New Moon can not escape it's source material -- LM Montgomery's Gothy follow up to her famous Anne -- full of ghosts, shadows of death and insinuations to darker themes like murder, abuse and betrayal. All that considered this could have been a very exciting project indeed, but never fully takes advantage of its macabre potential. It's no wonder that audiences longing for another nostalgic, victorian, Anne of Green Gables-esq experience were put off by this cruel and disturbing view of turn-of-the-century Canadian life, while the low production values and the mundane script adaptation failed to grasp the more discerning viewer who might be unfamiliar with the original books. While I may seek out the other seasons as www.echobridgeentertainment.com releases them, I have a feeling that the Emily, Girl of the Wind animated series might hold my attention longer than this (assuming it ever gets a US release). The Japanese love LM Montgomery almost as much as Canadians do, apparently.

(It has been brought to my attention that this is pretty far flung from our normal viewing and reviewing, but hey -- inking comics can be mind numbing work that requires loads of bad TV and Cinema, and sometimes I need to get it out of my system, you lucky readers you! Hey I could wax poetic about watching Dawn of the Dead for the billionth time like every other movie blogger on the interwebs....)
Posted by Unknown at 12:52 AM 2 comments: 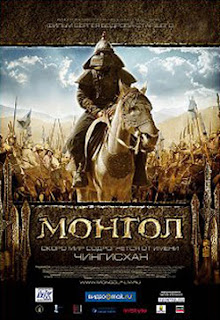 I'll admit to being easily drawn into historical epics and revisionist westerns, Mongol bridges both in it's approach to biographical/historic material. A bio-pic about Genghis Khan, from birth to height of adulthood. This Khazic co-production was directed by Russian born Sergei Bodrov with glorious, sweeping cinematography befitting of the subject matter. Nominated for best foreign film in 2008 it lost to German period piece The Counterfeiter. Tadanobu Asano stars as Temudjin (pre-Genghis) hereditary Kahn who's family was over thrown, and the young chief-to-be thrown into a life of slavery, escape and struggle before coming into his own. Throughout he is driven by the love of his life Borte played by newcomer Khulan Chuluun, who bears the children of other men, bargains with hostiles and always keeps the home fires burning for her husband, and more, the man she believes will change Mongol forever. As always Tadanobu Asano delivers a strong performance, but it is Chuluun who stands out in this stellar cast. In the wake of post-Soviet hits Nochnoi Dozer and Dnevnoy Dozer, the industry seems to be blossoming, at top speed no less, with big budget, FX savvy films, and I hope very much to see more of the same. I waited a while to get my mitts on Mongol and I was not disappointed.