Yes, you can rent these titles!

Available on Domestic DVD and still worth watching!

Along with the hundreds of import discs and out of print rarities we sift through week to week, we are also hard core Netflix users, turning around disc after disc, we consume movies! And believe it or not, there are some completely accessible releases that the casual viewer may have missed.

Rampo Noir is a dark string of related vignettes, based on the short stories of Edogaro Rampo. Really savvy anime fans (if such a thing exists) may have caught Rampo homages in the background of the Recent Rozen Maiden tv series. Anyway, Tadanobu Asano tops a cast of excellent actors, the creepy unsettling situations are well photographed and the director takes great pleasure in making very ugly images painfully beautiful. From start to finish, this is horror-gone-art-film worthy of early Cronenberg and Kiyoshi Kirosawa.

Staying in Japan but moving away from fiction, Perfect Fake, a Canadian documentary tackles artificial sexuality in the form of sex dolls, interactive media and... Araki Gentaro's toy sculptures? OK. Well done and informative if a little unsettling.

Princess Raccoon is classical Japanese Opera meets modern story telling. Surreal, beautiful and sometimes stupid but worth watching. Makes better use of Ziyi Zang then Memoirs of a Geisha did for damn sure.

Empire of the Wolves is your pretty basic French Crime yarn with Jean Reno doing what he does best. Works well with the Crimson Rivers films, but not directly related. And no, I will not watch "just anything" because Jean Reno is a cool action hero. I made it through about fifteen minuets of The Corsican Files before I gave up. The allure of French Comedy continues to elude me...

In the mean time I'm still waiting for the entire Alex De La Iglesia collection to be released stateside (I would so like to watch Day of the Beast again...). Or for Attack the Gas Station to slip in with the tidlewave of mediocre Korean cinema available on DVD. I'm tired of telling people about it then remembering the only available version for rental is dubbed into Mandarin and subbed in English-- still unacceptable to purists like myself. However Danger Diabolik came out remastered, and if you've only seen it on a crappy VHS, go, go go put it in your rental queue!

More imports and animation when I return...
Posted by Unknown at 11:30 AM No comments:

Marcel Marceau passed away on September 22, and since I have no great love for French mimes -- no matter how famous they are -- I figured I'd reprint my old review of his 1974 horror-movie fiasco SHANKS, from SHOCK CINEMA #4 (1992).

SHANKS (1974).
This barely distributed film was William Castle's last excursion into directing. Self-labeled a "grim fairy tale", it stars mime bigshot Marcel Marceau as a mad puppeteer. But don't go into it expected any of Castle's famed gimmicks like Emergo, for this is simply a creepy (or should that be crappy?) mess. So juvenile and crudely produced that it feels like a European AfterSchool Special instead of the twisted fable Castle was hoping for. And so filled with unintentional hilarity that it's simply embarrassing after a while.
Marcel, who can barely act in the first place, is saddled with a dual role. First, as the title character Malcolm Shanks, a deaf and dumb puppeteer (with tragically flaired pants) who's living in a hovel with his drunken, shrewish family and their outrageous foreign accents (if bad accents were a crime, the entire supporting cast would be in Attica). But one day Malcolm is hired by a rich old recluse (also poorly played by Marcel, under six pounds of cheap latex). You see, the old man is experimenting with reanimating the dead by stuffing electrodes into them, and he needs a "puppeteer" as talented as Shanks to make them walk about. After rehearsing on chickens, they move onto humans, which initiates some cheap slapstick at the expense of the dead.
It's admittedly bizarre to watch Shanks collect his deceased human puppets (though after a while I began to wonder why they never started to stink), and even more so when the corpses begin dancing and accidentally cutting off their own fingers at a li'l girl's birthday party. But for every offbeat moment, you get long boring scenes of Marcel pining for the jailbait girl of his dreams. Zzzzzz. And just when you thought it had hit its height of absurdity, a motorcycle gang suddenly roars onto the scene (with Don Calfa and Helena Kallicoates as a couple of the motorcycle sickos), as if they're escaped from some other movie! And suddenly Marceau turns into the most dubious action hero of all time! Hell, Mister Rogers has more macho charisma!
Castle takes a genuinely twisted concept and executes it with all the finesse of a Carol Burnett Show rerun. Sure, it's weird as hell, but it's also stunningingly inept most of the time. You can tell Castle was hoping to create a magical fable (similar to what Tim Burton accomplished with EDWARD SCISSORHANDS), but arrived only with a cosmic misjudgement, from its annoyingly cutsy credits/segues, to its interminably upbeat finale. I just kept shaking my head in utter disbelief, and the movie clocked a near record number of walk-outs at the Film Forum theatre...I often wondered why this movie hadn't been shown in over a decade. After grimacing through it, I now fully understand.
Posted by Shock Cinema (Steven Puchalski) at 3:12 PM 4 comments:

My Favorite Scene in DEATH PROOF

It was a very cool surprise to discover that SHOCK CINEMA makes a cameo appearance in the extended DVD-version of Quentin Tarantino's DEATH PROOF. We're also in good company, alongside FANGORIA, ESSENCE, FILM COMMENT, EBONY, VIDEO WATCHDOG. et cetera.
No question, this is the best 7-11 magazine selection you'll find anywhere in the country, much less Lebanon, Tennessee.

A big salute goes out to Monsieur Tarantino!
Posted by Shock Cinema (Steven Puchalski) at 12:33 AM No comments:

Posted by Shock Cinema (Steven Puchalski) at 12:17 AM 1 comment:

I think they should have Saturday Morning Cartoons for Grownups...

I've come to the slow realization that comic books are about to become a much larger part of my life... so in that spirit, I thought I would go over some of my favorite animated projects that have been available State side at one time or another.

I'll start with Tekkon Kinkreet: Based on the manga of the same name by French influenced Japanese artist Taiyo Matsumoto, this is the first real project by Studio 4C to reach the US legitimately. Long time readers of Shock Cinema may recall Mind Game from the Film Flotsam section of the magazine a few issues back. Well, this is the same group of people with an American ex-pat at the helm (don't be put off, all you anime purists, he's worked for the company for years -- hello, Animatrix). The film captures both the style and esoteric story telling of the source material and will probably confound your average US viewer. Case in point: They are eating it up in France. 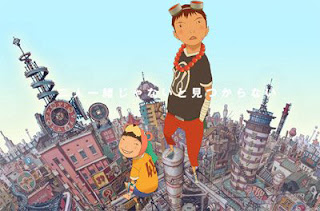 Speaking of France, I recently went looking for the English language release of Les Mondes Engloutis, or Spartikus and the Sun Beneath the Sea. This aired in the mid 80's in the US along with a package of Japanese-animated-for-French-TV Saturday morning fare. This French made, two season series was by far the most memorable. While the animation is stunted, it perfectly compliments the design and story. It would make a nice companion to Tekkon Kinkreet, but it is unavailable. Oh poo. If you do find yourself confronted with a musty old VHS copy, be forewarned that the US and Spanish release included the treacley pop stylings of Menudo over the end credits. UK and German viewers were spared this indignity. 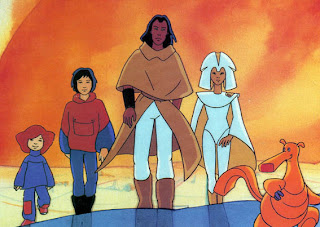 Because of the sheer volume of animation that comes out of Japan, it may seem like that's where all the cool stuff is. Sure, I'll happily watch Paranoia Agent for the third time, or FLCL for the tenth, but I'm not an anime fan over all. I mean, good animation is just, well, good animation. That is why the Popeye The Sailor 1933-1938 is still at the top of my Netflix queue. A four disc set, arranged chronologically, re-mastered... a wet dream for Fleischer fans everywhere.

Oh, what I wouldn't do for a clean copy of the English dub of Felidae, a German animated feature from the mid 90's. Complete with swearing, sex and violence, a feline Sam Spade tries to solve the mystery of grisly cat murders in his new neighborhood. The Disney-eque style compliments the dark subject matter perfectly. Watch it with The Plague Dogs for a double bill of not so cute and fuzzy.

I still have a stack of animated oddities to make way through, so I'll end my commentary for now, but I'm sure I'll be back with more as I'm always on the look out for the next mind blowing feature in my favorite film category -- Animation!
Posted by Unknown at 11:34 AM No comments: