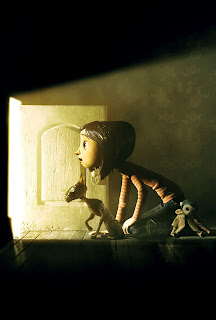 I hate making fun of Hot Topic. It’s not because I buy my “Twilight” hoodies and man mascara there but because the store is such a big, fat mopey target. I mean, everybody makes fun of this place. Pointing out that Hot Topic sells rebellion to undiscerning 14 year olds is like pointing out that airplane food is often unappetizing. It’s an obvious observation that ceased being funny or insightful several years ago.

Yet as obvious as this observation can be it still bears repeating because Hot Topic is a truly horrible store. My main issue with this place is the fact that they’ve managed to turn “The Nightmare Before Christmas” into a grating, Goth fetish object. When I watch this movie I no longer see Henry Selick’s intricate stop-motion animation, I can only see the sneering faces of several million morbidly obese girls in Betty Page bangs. It’s tragic and it will happen again. It’s only a matter of time before Selick’s latest effort, “Coraline,” is co-opted and ruined by a store that sells summer scarves. So please, do me a huge favor and see “Coraline” before it’s turned into an ugly, ubiquitous tchotchke.

Based on a 2002 novel by Neil Gaiman (Yeah, I know. But don’t judge a book by its insufferably pretentious author), “Coraline”, not surprisingly, tells the story of Coraline Jones (the voice of Dakota Fanning) a needy and somewhat bratty pre-teen who moves with her distracted parents (John Hodgman and a surprisingly good Teri Hatcher) to an apartment in a seedy old house. With her parents busy writing a gardening catalogue, a bored Coraline starts to feel neglected until she stumbles upon a secret door in her living room. The door leads to an impossibly perfect mirror universe where she finds her “Other Parents” (Hodgman and Hatcher again) a perma-grinned couple with black buttons for eyes who claim to be Coraline’s real parents. Although initially charmed by her new, fun parents, Coraline grows apprehensive when their true intentions are revealed.

Like “The Nightmare Before Christmas” (as well as “The Corpse Bride”) “Coraline” is a painstakingly crafted mini-epic that ably balances unfettered creepiness with genuine whimsy (both of which is on generous display during the opening credits sequence). However, unlike “The Nightmare Before Christmas”, the storyline is as well crafted as the stop-motion imagery. I particularly liked the fact that some of the script’s goofier throwaway details (like a cannon that shoots cotton candy, a collection of stuffed, bewinged Scotty dogs and a tractor/preying mantis/helicopter hybrid) play more sinister and significant roles later on. Odd, droll and, at times, surprisingly scary, “Coraline” is everything a kids film should be. Oh , by the way even though the film was shot in the amazing, miracle process of 3-D, it actually functions better without the distracting gimmick. 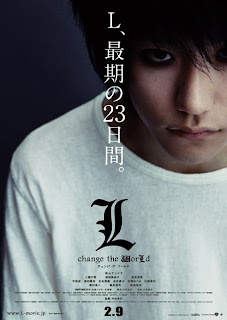 I admit to having gone through an uncharacteristic (for me) love affair with all things Death Note. Mind you, the usual rule of thumb is that if I like a property it is doomed to be a failure, universally hated or leave people scratching their heads. Not so here! Death Note was a phenomenon in its native Japan, banned in China and controversial but hugely popular in the US.

I quite enjoyed Death Note I and II (see Shock Cinema Magazine #33) and was excited when one of my birthday gifts turned out to be the third film in the franchise. Some movie-savvy friends who attended a very early US screening of L reported back that it was "boring" and "confusing, and granted, if you haven't seen the other Death Note films or read the manga, no doubt that is an apt reaction to this complex, ongoing story line. The L novel, which was not written by either of the creators of the manga, is the only book in the series that I have not read, so I can't speak for the adaptation in this case. The first two films strayed from the manga but not to the detriment of the story telling, my guess is that the same methods were employed here. I'm not a hardcore fan who thinks an great adaptation is a pedantically accurate one.

The production values and cartoony CGI elements are the same high quality as the previous films, as is the acting. While I still feel the best performances of the series came in the form of Yagami Light and his police chief father (both rolls diminished here to video footage in the backgrounds), Quirky detective L is at top form, acting weird, being a jerk and eating enough sugar to make even a hard core junk-food addict swear off sweets for good. That Ken'ichi Matsuyama can actually carry a film without the benefit of more seasoned performers surrounding him (Tatsuya Fujiwara starred in Battle Royal before playing Light as well as a host of other projects for a fairly young guy, and Takeshi Kaga is a legend) makes me more interested to see him in the upcoming Detroit Metal City. Shunji Fujiura returns briefly as Watari, the Alfred to L's Bruce Wayne, before being dispatched much the way he was in Death Note II.

This story takes place just after film two ends. L, "the world's greatest detective" has twenty days left to live (it has to do with the way he solved the mystery of the first two films, I won't try to explain) and yet there is a weaponized virus on the loose and a group of eco-terrorists that must be stopped before his time is up! Worked into this mix is a small Thai boy-genius who is immune to the bio-weapon plague, a teenybopper who's father is a brilliant Virologist, and said virologist's sexy co-worker Dr Kujo (and ultimately the baddy of the story) played by Youki Kudoh -- the Karaoke belting kid of Sogo Ishi's 'Crazy Family' - all grown up and lovely (but still crazy!). Since this plot is not driven by the Death Note device, the weird-shit-factor in the form of the CGI Shinigami are kept to minimum, a cameo even, which is a shame because I really got a kick out of Ryuk's excellent voice actor, Shido Nakamura. Be warned that, as the rule in third sequels, the kids factory in pretty heavy -- not Mad Max Beyond Tunderdome heavy, but still... Also, it seems odd to tack such a happy, positive message to a series that is characteristic for projecting an ugly, cynical view of the human race and stars a character who you know perfectly well is doomed because you saw him die in the previous film. Hmmm. Director Nakata (Honogurai mizu no soko kara- Dark Water, Ringu), does what he can with the material and keeps it moving along - no small feat considering it clocks in over two hours long - but certainly not his most dynamic attempt either. One does get the feeling this veteran horror film director relished the flesh-eating-virus scenes. Nice cinematography by Tokusho Kimura (Ju-on, Kiyoshi Kurosawa's Cure) ties the visuals together. Certainly an entertaining addition, but really this is aimed at the Death Note fans, newcomers would do better to start elsewhere.
Posted by Unknown at 1:18 PM No comments: