Film Review: THE FATE OF THE FURIOUS by Mike Sullivan


Who wrote THE FAST AND THE FURIOUS series? Whoever it is, please don’t tell me. Never reveal to me the identity of the writer or writers behind this franchise. In my mind the true author of these screenplays is a dimwitted man-child in an engineer’s cap who recently realized that cars aren’t those things with the sails that float. I want to believe that before his screenplay was given a slightly different rewrite, it was just 200 pages of the words ‘family’, ‘vroom’, ‘that’s what I’m talkin’ about’ and pictures the screenwriter traced out of the most recent issue of CARtoons. I don’t want to think that an adult in their right mind who doesn’t constantly wear an engineer’s cap sat down in some place that wasn’t the top bunkbed in a halfway house and decided that a computer is somehow powerful enough to hack a reflection in a car window. Because this is the adult equivalent to a picture of ‘army guys doing war and stuff’ that a ten-year-old doodled in their notebook during math class.

But whether the FAST AND THE FURIOUS franchise is written by a 48-year-old man named Jimmy who grabs gas station hot dogs off the rollers, shoves them in his mouth and wanders off without paying or a slumming Kenneth Lonergan under a pseudonym who is secretly making fun of the people that ignored MANCHESTER BY THE SEA (I was one of those people. Also, if true, fuck you Kenneth Lonergan), the series is still dumb. Granted, I’m not exactly breaking new ground by saying that, but the films are dumb in a way that never stops being entertaining. Somehow THE FAST AND THE FURIOUS sequels always manage to be dumb without teetering into the two hour, ice cream headache inducing abyss of stupidity that is any given Michael Bay movie. And though slightly aware, they never sink to the insufferable level of I’m-not-nearly-as-clever-as-I-think-I’m-being’ self-parody of the SHARKNADO series. It’s a very difficult balancing act and at any moment the series could easily stumble and fall into either extreme but with THE FATE OF THE FURIOUS, the series still manages to prove that a dumb movie is sometimes better than a legitimately good movie. At least in terms of entertainment value. 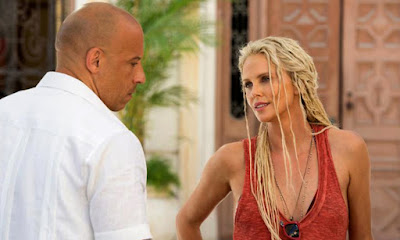 THE FATE OF THE FURIOUS opens in Cuba. Why it opens in Cuba, I’m not sure. I’m also not sure why the series insists on making Michelle Rodriguez and Vin Diesel a couple. Watching these two kiss or share pillowtalk is like watching an Arby’s Meat Mountain sandwich wrapped in a black tank top get dropped on top of a concrete slab that someone sharpied a frowny face upon. I think this why the characters are rarely seen together throughout the film’s two-hour-plus running time. At any rate, they’re in Cuba and they’re using their very shaky grasp of car-mechanics to settle a score with a smug repo man. Basically, the pair challenge him to a street race in a CHITTY, CHITTY BANG, BANG whimsy-jalopy that’s rigged with a soft can pull tab that makes the car drive backwards really fast. They manage to somehow win the race but being that Diesel’s character is nothing short of a Christ-y, Oprah-like figure, he gives the repo man a car just for trying. In fact, he basically gives everyone a car within earshot because even though Diesel looks like the Thing from the Fantastic Four after somebody buffed his cracks out with Bondo, he’s a good dude. From there, THE FATE OF THE FURIOUS awkwardly reminds you once again that this series stopped being about illegal street racing several sequels ago and is now -- quite inexplicably -- about illegal street racers who secretly drive really fast for the government to stop bad guys. Charlize Theron, looking like she just shot a sketch about freegans for PORTLANDIA, blackmails Diesel into helping her commit crimes for reasons I could never fully grasp. Something about a nuclear powered submarine that can destroy all of the Wi-Fi? I don’t know. Nonetheless, we don’t immediately find out what she has on Diesel. She just shows him something on her phone. Personally, I was hoping it was that picture of Diesel looking dopey and bloated without his shirt on that took the internet by storm a few years back. 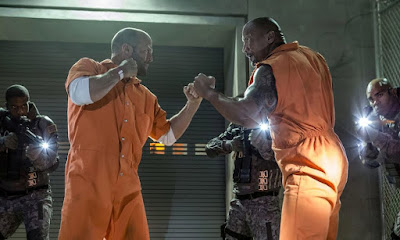 At this point, I lost whatever narrative thread was driving THE FATE OF THE FURIOUS. But that’s ok, because plot is disposable and only presented in the five minute increments that exist between the film’s various automotive pop-shots. Which is just as it should be because if this film was nothing but automotive pop-shots, you’d never be able to go to the bathroom and the world of THE FATE OF THE FURIOUS needs to be entered on a bladder that is as empty and voided as humanly possible. This is a world where oily pork mounds like The Rock and Jason Statham wear provocative muscle shirts, kick each other in the chest and inanely tough talk each other in locations that simultaneously function as highway underpasses and abandoned factories. This is a world where one woman -- apparently cosplaying as 4 Non Blondes’ Linda Perry -- can hack into and somehow control every car in Manhattan. This is world where -- Holy Fuck! Is that fucking Helen Mirren?!? What the fuck!?! Helen “Fucking” Mirren is in this fucking film! In short, it’s a flashy, shallow world but in a way it needs to be because it doesn’t understand what character development or even dialogue is. Theron’s character isn’t a character as much as she’s the stiff semi-human equivalent to that scene from THE DARK KNIGHT where the Joker wires the two ferries to explode. The word family is said so much THE FATE OF THE FURIOUS eventually becomes a feature length Olive Garden commercial with shrinkage jokes. By the time Jason Statham is running around on a plane murdering Theron’s henchman as he carries around Diesel’s character’s son (we know it’s his son because the kid looks like he’s trying to figure out who farted in an elevator after he was hit in the face with a frying pan) it’s such a relief because nobody really needs to say anything. Least of all Diesel, who at this point in his career sounds like an unfair SNL sketch character version of Vin Diesel. 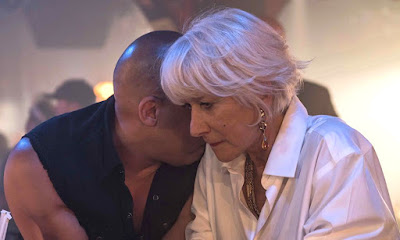 Posted by Shock Cinema (Steven Puchalski) at 7:20 AM 4 comments: