Criticizing a film by Brad Peyton is like criticizing a meal at The Cracker Barrel. You knew how bland and regrettable the experience was going to be before you walked through the door, so why complain? Like his peers, Jonathan Liebesman and Paul W.S. Anderson, Peyton makes movies that are, in essence, too expensive to be released directly to Redbox, but not good enough to be released in theaters outside of entertainment dead zones like January, April and September. He makes filler, basically. Cinematic placeholders with decent trailers that get a biggish opening weekend before they’re quickly undone by negative word of mouth. In short, Peyton is a man whose legacy lies within the dust covered DVD section at any given interstate truck stop. But here’s the thing, in spite of the fact that his filmography consists of seemingly anything playing on a Sunday afternoon on TNT, he’s done something that both Gareth Edwards and Peter Jackson were unable to do. Brad Peyton -- the artist behind a forgotten CATS & DOGS sequel and INCARNATE, a movie in which a gravel-voiced, wheelchair bound Aaron Eckhart described human souls as “wifi that attracts demons” -- has given us a giant monster movie that is non-pretentious and -- god help us all -- legitimately entertaining. 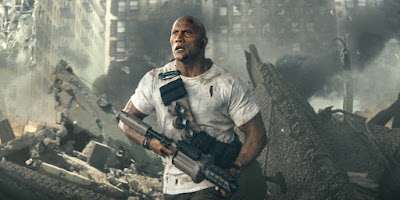 RAMPAGE opens in a space research facility that is being torn apart by a giant rat. The only surviving astronaut on this mission is tasked with retrieving the purpose of this research: vials that are filled with a substance that can perform “genetic editing”. What genetic editing does, how it makes living things bigger and why it can give a wolf bat wings but not a gorilla is never explained properly. RAMPAGE just wants you to know that an evil corporation called Energyne has subverted genetic editing beyond its original, also vaguely defined, intent. What is important is that Marley Shelton is playing the astronaut! And it’s good to see her on the big screen again. I can’t be the only one who thought GRINDHOUSE was going to be a career breakthrough for her. But then, I’m sure I’m not the only one who had inflated expectations about GRINDHOUSE and what it was going to do to the pop-cultural landscape. I want to say that Bella Heathcote made her irrelevant what with her similar haunted, but sexy, thousand yard stare, but Heathcote is just as underutilized as Shelton. At any rate, Shelton dies in an escape pod explosion as she makes her way back to earth causing the trio of vials to land in various locations throughout the USA. 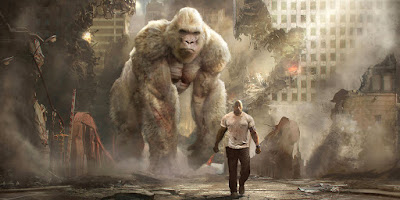 We then cut to a primatologist played by a sinewy beef hill (Dwayne Johnson) who is taking care of an albino gorilla named George. To sort of explain why a primatologist is as insanely jacked as the one played here by an affable pork boulder, RAMPAGE tells us that the chilling site of an upset gorilla caused the shambling man-brisket to shed his special forces fatigues in favor of a primatologist’s safari jacket. This is not an origin story befitting a veiny, glistening rump roast. It should revolve around the Cronenbergian wall of pecs and flesh’s attempt to take out Ugandan dictator Milton Obote, his friendly fire that caused the death of Dian Fossey and the pec wall taking her place as a kind of penance, even though he would have to be 13 for this to make any kind of sense. As it turns out, George is intelligent, but not only that, understands pranks and several filthy hand gestures such as the fuck you finger and that thing you do when you roll your left hand into a fist so that your right index finger can have sex with it. I should mention that every scene from this movie looks like something the characters in a Coen Brothers movie would watch or be in the process of making. RAMPAGE is dumb but dumb in a way that makes it an accidental commentary on the shallow qualities of Hollywood blockbusters. And yet it keeps getting dumber. 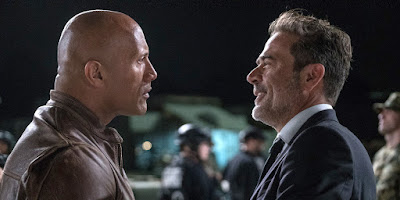 But the dumber it gets the more fun RAMPAGE becomes. Especially once the vials start infecting its unwilling participants -- a wolf, a crocodile and George. Obviously, half the fun is in watching sequences where a wolf with porcupine quills and bat wings brutally massacres Joe Manganiello and his fellow soldiers of fortune or the goofy finale that finds the trio of monsters clashing in downtown Chicago, but most of what makes RAMPAGE enjoyable is that it’s structured like a bad Saturday Morning Cartoon. Malin Akerman and Jake Lacy (better remembered for playing “New Jim” during the last sad gasps of the US iteration of THE OFFICE) play the CEOs of Energyne as CAPTAIN PLANET villains. Not just because they’re one-dimensional, mustache-twirlers but because their plan makes so little sense. They’re developing genetic editing as a weapon of war but it’s not clear how. Are they planning on using it on animals or people? If so, how are they rounding up these monsters once the mission is accomplished? Granted, there’s a beacon that’s supposed to draw these things to their target but it doesn’t really calm them down or deprogram them once they finish their objective. The monsters just punch the device until the building they’re on collapses. Also, why did Akerman and Lacey insist on placing this beacon in the middle of downtown Chicago at the top of their corporate headquarters? Wouldn’t it have made more sense to put this beacon in the Nevada desert or a sparsely populated area in Alaska? If that isn’t cartoonish enough, Jeffrey Dean Morgan’s government spook character is a Tommy Lee Jones impression wrapped up in an oversized belt buckle, nickel-plated revolver and unwavering shit-eating grin. His character feels like an unproduced GI Joe action figure called Rhinestone. Additionally there’s a ton of weird inconsistencies such as the fact that bullets are useless against the genetically enhanced animals but tranquilizer guns aren’t and really dopey attempts at Marvel Studios-style easter eggs. As you may have already known, RAMPAGE is based on a video game. Peyton’s idea of an in-joke is to place a RAMPAGE arcade cabinet in Akerman and Lacy’s sprawling office but never allude to or even mention its existence, which is very weird because the events in this movie mirror what happens in the video game. Right down to the fact that the wolf, gorilla and alligator that punch buildings in this are named after the wolf, gorilla and alligator that punch buildings from the game. Was the video game the inspiration behind the idea of genetic editing? Why the fuck is this in here! It’s like having a scene in LITTLE WOMEN where all the characters are reading a copy of Little Women but never acknowledges just how strange that is. 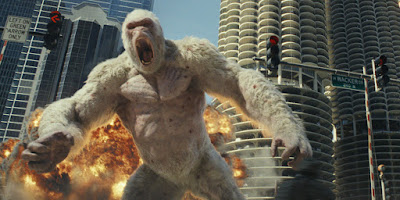 RAMPAGE is a stupid film. It’s loud, empty and will drown in INFINITY WAR’s wake. But none of that matters because RAMPAGE is such an enjoyable experience. It’s not only what video game adaptations should be, it should be what giant monster movies should model themselves on in a post Godzilla/Skull Island America. RAMPAGE does what it needs to do and does it decently. Plus, it’s nice to see a throwback to '50s sci-fi like THE CREATURE OF THE BLACK LAGOON in which a scientist -- or in RAMPAGE’s case, a primatologist – somehow manages to order generals around and is able to declare martial law. You finally did it, Brad Peyton, you made an entertaining movie. Now do the world a favor and retire.
Posted by Shock Cinema (Steven Puchalski) at 4:53 AM

Hi. I'm Michael. Just recently found your stuff after watching Hitchikers (1972). I just thought you might appreciate this. A site to log all of your films, and review or list them. Here's my profile for an idea of what it looks like:
My profile on Letterboxd https://letterboxd.com/WilzyMikey

If you do join leave a comment on one of my reviews and I'll follow you. Great community on Letterboxd for film addicts!