The weekend after AQUAMAN was released I overheard someone note in the magazine section of a Books-A-Million that “AQUAMAN was fun! Like the Brendan Fraser MUMMY movies!” I laughed when I heard this because comparing AQUAMAN to the MUMMY series seems like the faintest praise you could damn a movie with. Those movies aren’t fun as much as they’re ‘something not unpleasant to half-watch on the TV at the Pizza Wheel if you went there too early for your take-out order and your phone just died.’ 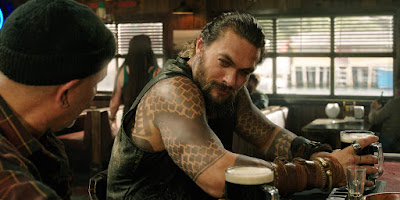 But then I realized that the steadfast, admirable mediocrity of THE MUMMY series seems almost too high of praise for a film concept that for several years existed only as cultural shorthand for the creative bankruptcy of Hollywood and its willingness to adapt any recognizable IP into a multi-million dollar franchise. For decades whenever there was an announcement that some obscure or seemingly lame comic book property was being adapted into a movie, the clicketty-clacketty sound of a million hilarious and very original dudes typing the words, “What’s next? AQUAMAN: THE MOTION PICTURE?” on the AICN comments section immediately followed. The idea of a movie revolving around Aquaman was such a lazy, comic conceit that one of the laziest shows on television -- ENTOURAGE -- took this rejected ROBOT CHICKEN gag and mashed whatever gristle remained on this long-dead, beyond decayed horse into the be-Kangoled foreheads of its undiscerning audience for an entire season. As a film concept, AQUAMAN wasn’t just a joke, it was one of the oldest, unfunniest jokes you could ever tell. And yet, if a concept as unwanted and failure bound as AQUAMAN managed to be as pleasant and watchable as THE MUMMY, wouldn’t that make it kind of successful? If taken within those meager terms, AQUAMAN is kind of successful. 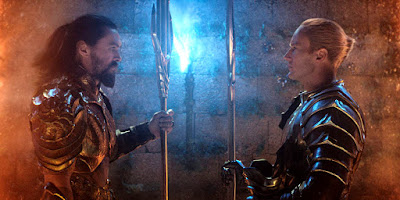 AQUAMAN isn’t a terrible movie, but the filmmakers -- much like the editors at DC -- are clearly overcompensating for what they perceive to be the character’s wimpy past. Aquaman is a badass! A FUCKING BADASS! Do you hear me? And orange chainmail and wavy blonde locks are fine for King Arthur and his knights of the fish fuckers, but not for this ain’t yo daddy’s Aquaman! Aquaman needs to look like a divorced dad’s panicked mid-life crisis fueled makeover if he thought Criss Angel was still relevant. Aquaman needs to be Renegade-era Lorenzo Lamas, a Capri Sun commercial from the mid-90s and the intro to Viva La Bam after it all of it was consumed and pissed into a bottle of Venom Energy Drink. Greasy, grisly guitar riffs need to punctuate his every move when he’s murdering a black guy on a submarine. He needs to be an awesome party dude who speaks frankly about urinating in, on and around ancient cylinders. Yet, even though director James Wan leans into the idea of an Aquaman who looks like he could be that guy in a Denny’s and ragweed scented SONS OF ANARCHY jacket hanging around the parking lot of a Five Fingered Death Punch concert hassling people for tickets, the film clearly seems more at ease with the idea of a perma-grinned Aryan Aquaman; the kind that never stops waving at an unseen audience as he rides around on a giant seahorse. Seemingly inspired by THOR: RAGNAROK, AQUAMAN doesn’t take itself too seriously. But whereas the third Thor movie was helmed by a comparatively more artful director with a strong grasp of what does and doesn’t work in a comedic sense, AQUAMAN seems to be helmed by the same 35 writers behind THE FLINTSTONES movie. At one point an octopus is seen playing the drums, at another Amber Heard is seen wearing a prom dress made out of a squid and several jellyfish, a character calls another character a, “slack-bellied slug.” Hell, there’s even a bit involving the reverse scuba suits worn by Atlantean soldiers (why some Atlanteans can breathe on land unassisted while others can’t isn’t explained) and the desperate lengths these soldiers will go if their suits are compromised on land -- they’ll stick their head in a toilet. If RAGNAROK was a live action Jack Kirby comic, AQUAMAN is a nearly three hour episode of JABBERJAW. This is a cartoon. A dumb cartoon that’s dumb cartooniness is reflected in Heard’s cheap-looking, four-color getup as Mera. Heard doesn’t look like she’s playing a character as much as she looks like she’s cosplaying as a character from the AQUAMAN movie. 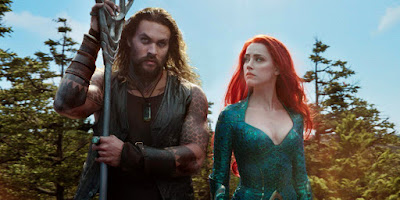 Yet as dumb and as cartoony as AQUAMAN is, the film is needlessly convoluted and bloated. A superhero movie with a message about the importance of believing in yourself shouldn’t be the exposition equivalent to THE SARAGOSSA MANUSCRIPT. Characters explain things within explanations within exposition-laden flashbacks of a Poseidon hologram made of water reciting exposition. Like too many superhero movies, AQUAMAN is mostly a bunch of actors in front of a green screen taking turns reading a Wikipedia entry about the property the movie is based on. But apart from the exposition, AQUAMAN is way too long. Roll your eyes as much as you want when discussing Tim Burton’s BATMAN, but it’s a leaner and a far better paced film. BATMAN didn’t need a twenty minute prologue revolving around the courtship of Batman’s dad and a freegan with white girl Trustafarian dreadlocks that lives in the ocean (Nicole Kidman). BATMAN didn’t take a break from its storyline so that its titular character could go on a treasure hunt in a sequence that plays like an unwanted mash-up of SAHARA, SPLASH and UNDER THE TUSCAN SUN. BATMAN didn’t need to nudge its audience in the ribs about past events while simultaneously setting up future events as if it was the fifth episode of an AMC series in its third season because it was a movie with a beginning, a middle and an end. Not a cog in the wheel of a bigger franchise that’s cycling through an endless second act. 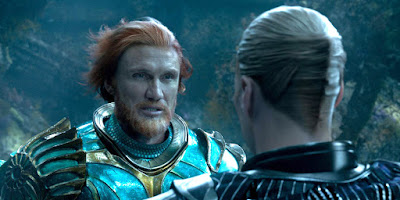 But, again, like the Brendan Fraser MUMMY movies, AQUAMAN isn’t terrible. In fact, there’s quite a few things I liked. To start with, everyone is floating in this. Dolph Lundgren, Willem Dafoe, Graham McTavish and the rest are all bobbing unnaturally along in the ocean while standing bolt upright, arms crossed, their hair flailing wildly. Untold millions spent on CGI and everybody is stuck in an eerie tableau as if they were discarded JC Penney mannequins that were chucked into the river. And speaking of off-putting CGI, I loved the goofy touch of having Oceanmaster’s metallic helmet mirror the facial expressions of its wearer: the deeply unappealing Patrick Wilson. Watching a helmet cry out in anguish was nearly as sweet as seeing Wilson -- an actor who in a just world would play nothing but a string of pissy, insecure high school math teachers in either Alexander Payne or Todd Solondz movies -- accept the role he should have played far sooner: an unctuous racist with gills. On a less backhanded note, I genuinely liked Yahya Abdul-Mateen II as Black Manta and the relationship he shares with his Somali pirate father (Michael Beach) and wished the movie could have instead been about these two robbing atomic submarines or stealing inexplicably advanced Atlantean technology. Unfortunately, we didn’t get that film. What we got was Brendan Fraser’s THE MUMMY: a movie you watched over a holiday weekend and instantly forgot about. But unlike THE MUMMY, memories of this movie will only come to mind when you stumble upon a Jesus Pez dispenser at a flea market a decade from now and realize that’s supposed to be that Khal Drago guy as Aquaman. 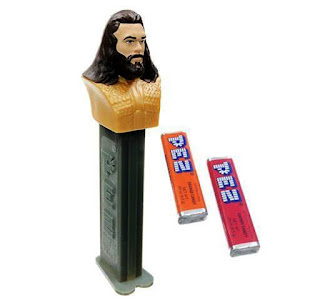 have to agree with you on the film, but like you I enjoyed it as I watched it with my boys. The scene where Aquaman and his love kiss in the middle of a roaring battle felt like a Harlequin romance novel scene. Guess they had to put it in for the ladies. The princess and her King, but whatever it still was a fun movie, and we all liked it. Jason Momoa as Aquaman seems to fit the bill.