Did Tim Burton’s films always look like a leather jacket with a rockabilly Snow White airbrushed on the back? No, right? Yes? I don’t know anymore. Watching DUMBO makes you question everything about the director. Is he a talented visual artist with nothing left to say but isn’t above taking an easy paycheck? Did the oversaturation of THE NIGHTMARE BEFORE CHRISTMAS dilute his stylistic choices to such an overwhelming degree that now everything he does looks like off-brand Edward Gorey clip art? Were we so blinded by those once refreshing stylistic choices we never realized that the themes and messages of his films were never deeper than, “They laugh at me because I’m different. I laugh at them because they’re all the same?” Again, I don’t know because I’m afraid to know the real answer. Considering he now has a decade’s worth of loud, disposable, eye-searing, CGI-heavy Hollywood blockbusters to his name, I’m afraid the answer is that Burton has morphed into Michael Bay. Granted it’s a sexless, explosion-averse Michael Bay in a Robert Smith fright wig, but Burton’s films are no less headache-inducing or superficial. 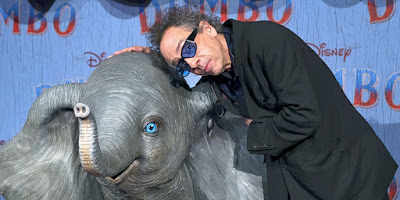 Even worse, because we now live in a world in which satire and its dumb, farting cousin parody are dead, Burton’s movies are now indistinguishable from a Funny or Die video mocking a Tim Burton movie. Tim Heidecker joked on twitter that he was cast as Ronald McDonald in Tim Burton’s -- for the time being -- fake McDonald’s movie, but the idea of Burton directing a Ronald McDonald movie is just as likely as him directing a DUMBO movie and maybe a little less ridiculous. Parody is useless in the face of DUMBO because nothing could be said about the film that the film doesn’t say about itself. At least unintentionally. After all, the McDonaldland gang seems a little more conducive to Burton’s ‘pale outsider’ trope and general mall-goth sensibilities than DUMBO does. Grimace even looks like a Burton drawing. Yet, with the possible exception of his unmade SUPERMAN LIVES, I can’t think of a concept more resistant to that Burton touch than DUMBO. But that doesn’t stop Burton from making yet another movie about an outsider who finds an unlikely family in an unexpected place while surrounded by sets that are the Disney Store equivalent to German Expressionism. Burton’s tics loudly clang against the simple, pastel storybook whimsies of the project and the end result is a MR. SHOW sketch that doesn’t realize it’s a MR. SHOW sketch. 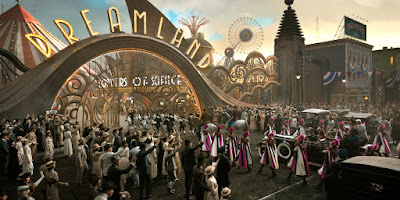 Burton has noted, “[he] wouldn’t know a good script if it bit [him] in the face” which explains a lot, but still, you would think, surely by chance, something would have bit him in the face at some point during the last twenty years. Did SLEEPY HOLLOW give him rabies and all of the good scripts were humanely put down after 1997? But with that said, there’s a big difference between recognizing a bad script and recognizing one that was written by Ehren Kruger. By that I mean there’s a difference between accidentally stepping in dog shit and willfully falling face first into a pile of elephant shit. Kruger was not only the screenwriter behind SCREAM 3, REINDEER GAMES and THE BROTHERS GRIMM, he was also responsible for three TRANSFORMERS sequels. For Burton to attach himself to a Kruger script after a long string of professional and creative disappointments seems to imply he didn’t care or couldn’t read. The script for DUMBO is bad, worse than ARLINGTON ROAD or THE SKELETON KEY or any of the $3 Walmart DVD bin titles Kruger’s name is typically associated with. Basically, it’s the story of a flying elephant told from the perspective of people who take in the majesty of a flying elephant with the tight smiles of actors on their twelfth take who can no longer pretend that a tennis ball on the handle of a Swiffer Wet Jet is a flying elephant. But where the original DUMBO ended at 64 minutes, the live-action DUMBO meanders onward for another 48 minutes with a takedown of Disney’s soulless commercialism that’s about as brave as telling your boss to fuck-off in a whisper while driving home from your job after you were fired. It doesn’t even feel like Kruger wrote a screenplay, it seems like he tried to wrangle an endless series of studio notes into a cohesive narrative. And most of those notes seem to be just the words “woker” written in blood across 120 pages. I understand Disney’s position in trying to distance themselves from all of the problematic parts of the 1941 version of DUMBO, but the updated elements carry the disingenuous and patronizing quality of Bradley Whitford expressing his questionable love for Obama in GET OUT. If Disney wanted to address the animal cruelty found in the animated original they just could have ended the remake with the titular pachyderm and his mother frolicking in the wild. It would be a perfectly fine, fitfully restrained conclusion. But we also get an epilogue in which the owner of Dumbo’s circus (Danny DeVito playing a sort of Disneyfied Frank Reynolds) announces he’s setting all the animals free and apparently replacing them with a zoetrope. If you can overlook the fact that this takes place in 1919 and just a few scenes earlier DeVito was keeping a monkey locked in his desk as a joke, it still feels like empty lip-service. It’s so perfunctory you wonder if the first draft of the scene was just “Note: DeVito died releasing all the circus elephants on the way back to his home planet” and Burton had to flesh that out as much as he possibly could. I appreciate what they’re trying to do but it isn’t subtle and this isn’t BLACKFISH. 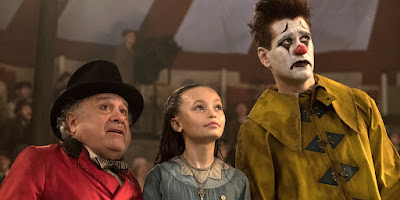 Another idea that feels like a studio mandate: none of the animals talk. For me, if you have a flying elephant in your movie, you shouldn’t just have talking animals you should have three mops that sound like Jimmy Cagney and a farting Model-T that communicates through the snippets of Eddie Cantor and Rudy Vallee songs that play on its radio (like a turn-of-the-century BUMBLEBEE). Why are we trying to add realism to a movie where the first shot depicts a smiling, possibly sentient choo-choo train? Case in point, early in the film when Dumbo is revealed to have enormous ears during a circus performance, the audience – bizarrely – is so appalled by this, they start rioting. While this riot is going on, Dumbo’s mother is approached backstage by one of her handlers who starts taunting her! How is the idea of a talking mouse in a ringmaster outfit dumber than a carny berating an elephant by telling her “they’re all laughing at your baby boy” as if he was yelling at Carrie White about her dirty pillows? 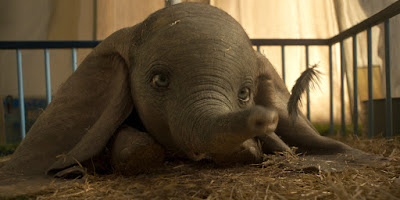 Of course, there’s the ideas that are specifically Kruger’s own. Ideas that reek of his unique dumb guy pretention. Colin Farrell plays a once popular trick horse rider who comes back from WWI as an amputee and is demoted to being Dumbo’s handler. Kruger desperately attempts to draw parallels between Farrell and Dumbo without realizing how insulting it is to compare someone with an actual disability to a fucking cartoon elephant in a clown hat performing loop de loops. At least Kruger’s trying to give Farrell a semblance of a personality. Everyone else is horribly underwritten, particularly Michael Keaton’s vague shrug of a villain and Nico Parker as Farrell’s daughter whose entire personality could be described as “likes saying the word science”. Parker’s character is so boring and underdeveloped her big dramatic moment revolves around her staring blankly at a Marie Curie mannequin. And then there’s the clunky references which are there to ensure that nobody’s ribs in the audience goes unnudged. Timothy the Mouse is given a superfluous cameo, cartoon Dumbo’s drunk visions of pink elephants is recreated with large soap bubbles in a sequence that furthers grinds this overlong movie to a screeching halt, Michael Buffer performs a cleaned-up, spoken word rendition of “When I See an Elephant Fly” before exclaiming, “Let’s get ready to Dumbo!” There’s other stuff, smaller stupider stuff, like the fact that Farrell suddenly has a steampunk robot arm at the end without explanation or the dog dressed up as a werewolf or that Dumbo can only fly when he inhales a feather through his trunk for. If all of this sounds like a so-bad-its-good-you-need-to-see-it-to-believe-it masterpiece, understand that all of this kitschy nonsense is not only couched within the horrible pacing of a late period Burton film it’s also represented by the hideous visuals of a late period Burton film. 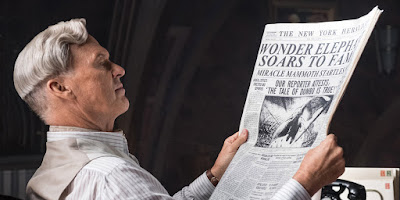 How do you describe the production design of DUMBO? The closest I can get is a Thomas Kinkade mural based around the hallucinations of noted serial killer Joe Kallinger but somehow more chilling and mawkish. Instead of the floating, mouthless head of a child named Charlie, we get a CGI elephant that looks like somebody put googly eyes on your grandfather’s withered testicles. And sometimes those elderly, googly-eyed balls are in clown makeup. Dumbo is a concept that can only work in animated form because the sight of a wrinkly, hyper-real elephant with enormous Walter Keane-style baby blue eyes flying around a circus tent with Eva Green on its back is unnerving and unnatural. That scene in THE FLY where a panicked Jeff Goldblum carefully pulls out his fingernails is less intense than any flying scene in Dumbo. And like the Brundle-Fly, vomiting acid on his pint-sized tormentors looks more natural for this Dumbo than a playful squirt of water from his trunk. Of course, the uncanny valley quality of its titular character isn’t helped by the fact the sets in Burton’s DUMBO suggests what HOUSE OF 1,000 CORPSES would look like filtered through the pages of A Little Golden Book. Burton’s DUMBO either needed to carry the gentle, water-colored hues of a Mary Blair painting or just be a full-on gothic reimagining of the concept; a circus FRANKENWEENIE, if you will. Unfortunately, it’s sort of a half-baked fusion of the two extremes and it never stops being ugly. 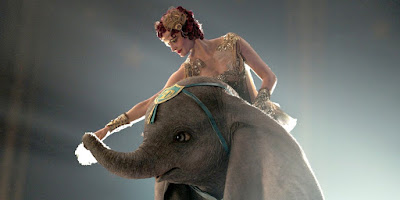 I can could go on, but you get the idea. DUMBO is terrible and that’s not surprising. What is surprising is when you consider there was a time when a Tim Burton movie wasn’t an F.W. Murnau film recreated with Precious Moments figurines. Didn’t he make one of Disney’s most iconic animated films of the 90s? Wasn’t he capable of making a quirky family film that wasn’t dull or alienating? No. That was Henry Selick. Burton’s the guy who’d probably make a feature-length version of Kevin Spacey’s Let Me Be Frank video if you sold Spacey to Burton as, “the ultimate outsider” and ensured him that Spacey is in no position to refuse to wear a Bride of Frankenstein wig and whatever hybrid Victorian straitjacket/striped ringmaster’s suit Burton has picked out for him.

Posted by Shock Cinema (Steven Puchalski) at 1:27 AM

Shock Cinema is excellent. I recommend all sensate beings read it.

I love to watch movie. Here i have a lots of new collection of movie. Check it

Hi! I also have interest in that. My search for this is finally over! I would like you to cover this topic a little more.

That is a very interesting issue. Lots of college courses online are open.