I won’t dispute that TANGO & CASH is a laughingstock. It’s an action movie that waddles towards the direction of parody but falls face first into a puddle of homoeroticism, prefers the puddle and lays there burbling out catty, tough guy one-liners while showing its finely toned ass to anyone willing to step over it. But is that really a bad thing? I ask because when the trailer for HOBBS & SHAW was released, many people compared it to TANGO & CASH, as if that was a terrible thing to equate it to. TANGO & CASH is basically an unconscious version of that live-action Troy McClure movie THE SIMPSONS’ writers wanted to make. There’s a car chase involving a dune buggy with monster truck wheels, a stripper who stops stripping in the middle of her act in order to perform a drum solo, a grenade is duct taped into someone’s mouth as a joke and Michael J. Pollard plays a crazy inventor! It’s excessive and stupid and probably one of the most entertaining action movies made in the past 40 years. Comparing HOBBS & SHAW to TANGO & CASH will have the opposite effect its naysayers intended. If you’re like me, you’ll walk into HOBBS & SHAW with such insanely high expectations you’ll only be able to walk away disappointed. So here’s a more accurate comparison, you know how McDonalds French fries are just appetizing enough to mitigate how disgusting they actually are? TANGO & CASH are McDonalds’ French Fries. HOBBS & SHAW are closer to the French fries at Burger King. You’ll eat it and it’s fine, you guess. But maybe the disgusting qualities slightly outweigh the appetizing ones? Maybe while you’re eating them you’re readily aware of how much better and different the onion rings with the zesty dipping sauce are -- which, in this tortured analogy, represent the FAST AND THE FURIOUS series. Basically what I’m trying to say is that I will eat my way through the kitchen of a Burger King until my heart explodes, coating everyone near me with the insouciant zing of Buffalo dipping sauce (the best dipping sauce at Burger King)! 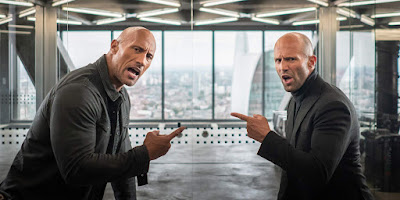 In the same way that FRASIER was a spin-off of CHEERS, HOBBS & SHAW is a spin-off of the FAST & FURIOUS series. And much like FRASIER, the only time I’ll watch HOBBS & SHAW again is when I’m paralyzed by depression and trapped in a couch-based-fart prison of my own making. Now, before I go any further, I should point out that cyborgs and faceless, Dr. Klaw-like supervillains now exist within the universe of the FAST & FURIOUS series. Wasn’t this a movie about Vin Diesel and Michelle Rodriguez stealing DVD players at one point? How is it possible that movies about really fast cars and “hot” outmoded home media players could comfortably fit within the Marvel Cinematic Universe if, for whatever reason, Disney acquired this franchise tomorrow? Imagine if RIVER’S EDGE turned into a franchise. Now imagine that what started as a film about troubled teens and the murder that affects their already fractured social circle, eventually morphs into a movie in which Crispin Glover, Dennis Hopper and Daniel Roebuck (as a ghost) travel around in a big rig killing river witches and swamp things. As stupid and jarring as the sight of a spectral Roebuck shooting lightning bolts at a witch in a paddleboat may seem, it still isn’t as jarring or stupid as the idea that the antagonist in HOBBS & SHAW is an evil cyborg (Idris Elba, who to be fair, is good in this) that performs dainty trick-riding stunts on a self-driving motorcycle. 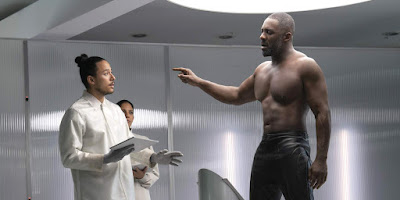 Dwayne Johnson’s Luke Hobbs and Jason Statham’s Deckard Shaw were the breakout characters of the FAST & FURIOUS series. People loved their flirtatious tuff-talkin’ and sexually charged drop kicks to each other’s masculine but inviting Double D’s. More accurately, unlike the other characters in the series, Johnson’s And Statham’s on-screen presence couldn’t be summed up as “a cement block with a frowny face sharpie-d on the front of it” or ”five pork roasts and three frozen turkeys carefully balanced on top of each other in the driver’s seat of a muscle car.” No, it was closer to a convulsing QUATERMASS EXPERIMENT-style mutation of biceps, lats and smirks. It was terrifyingly arousing. Yet as much fun as it is to watch immovable beef dunes make cruel assumptions about the size of each other’s dicks, it’s hard to picture these tendony, bipedal Clydesdales getting their own spin-off buddy comedy. Especially when these hard-bosomed he-chunks are such thin wisps of characters. 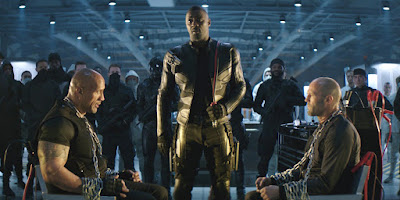 As characters, Hobbs and Shaw are the Saturday morning cartoon versions of both actors’ public personas. Everything about them is broad, one-note and not well-defined. Even their jobs seem like vague afterthoughts. Hobbs is an FBI-ish agent-like lawman? I guess? While Shaw is Oscar the Grouch wrapped within Richard Kuklinski wrapped within a Calvin Klein underwear model? I think? There really isn’t much to these characters beyond the fact that one is very big and the other is comparatively less big. Pairing up characters without a personality in a genre that demands big, clashing personalities isn’t a great idea. A worse idea is pairing up characters without a personality and -- through a split screen montage -- declaring to your audience that, in spite of the fact that they consume eggs differently, there aren’t any noticeable differences between these quivering ab golems. In essence, they remade THE ODD COUPLE with two underwritten Oscars who take turns jabbing each other in the balls and asking if they enjoyed their “maple nut taps” for two hours and fifteen minutes. 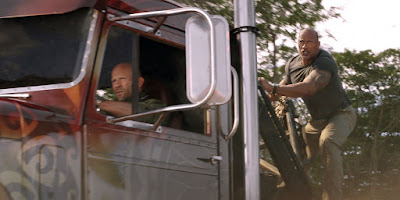 But what this film lacks in compelling, realistic characters, it makes up in scenes where swollen, puffy men poke each other in the chest and verbally assault each other with random entries from 1001 Zany Insults and Silly Slams for Little Stinkers. Look, I may not be the best judge of action movie one-liners. To me, they don’t need to be clever, just memorable. The bar for good action movie zingers stands about as tall as Sylvester Stallone calling Rambo a “pussy” in TANGO & CASH. So, realistically, you’d have to dig four feet underground just to shimmy under this bar. HOBBS & SHAW effortlessly shimmies under that bar with its assortment of clichéd, public domain put-downs. At one point, a craggy living monument to the glory of Muscle Milk threatens to shove his boot so far up the ass of Statham that he’ll be “coughing up laces for a month.” We’re nearing the end of the second decade of the 21st century, don’t we deserve fresher, livelier tuff-talk? Why couldn’t their insults escalate until they reached a fever pitch of unchained homoeroticism? Why couldn’t Statham grab Johnson by his shirt, lean in closely and hiss, “Call me the cow because your ass is grass and I’m ready to graze?” Because, as it stands, the homoeroticism in HOBBS & SHAW could be far more homoerotic. Sure, Statham and Johnson flash flirty ‘fuck me’ eyes at each other while they punch through the faces of an endless succession of stuntmen. But we’re far from the sight of a nude Stallone peacocking his way through a prison for beefy, flagrantly glistening men in TANGO & CASH. I keep hearing complaints about how millennials are ruining everything with their SJW, gender-neutral sensitivity tendrils but if that’s the case, why are action movies less gay nowadays? 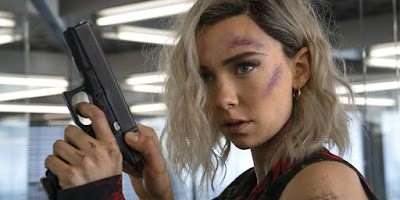 Yet, even as I was disappointed by the film’s resistance to basic characterization; tepid, barely there homoeroticism and the fact that Johnson and Statham make a pretty dire comedy team (It’s not Johnson’s fault, Statham can’t sell stupid dialogue the way his co-star can), I was impressed that HOBBS & SHAW managed to not just retain the stupidity of the FAST & FURIOUS franchise but take it into new thunderously dumb directions. For example, the plot revolves around Shaw’s sister (Vanessa Kirby, who like a cameoing Helen Mirren, is a bit too overqualified for this), injecting herself with an ill-defined nano-virus that liquefies organs. Eventually. Not right away. It takes several days and one exciting globetrotting adventure before your organs even start to soften, apparently. At any rate, Kirby does this in order to keep the virus out of the hands of a cybernetically enhanced Elba who, like the bad guys in ANGRY BIRDS 2, mostly exists in order to teach its protagonists the importance of cooperation. Of course, this barely there, afterthought of a plot exists only as a rickety framework to hang ridiculous stunts on such as a surreal FURY ROAD inspired sequence involving a helicopter and the tow truck equivalent to a Russian nesting doll. Let’s not forget the bizarre lengths the filmmakers go in order to justify the low-tech finale in which large Samoans beat Stormtroopers to death with wooden clubs. Evidently, Elba’s henchmen have guns that will not shoot without a decent wifi connection. It’s all very, goofy and absurdly unhinged. Yet, it’s never as much fun as it sounds. 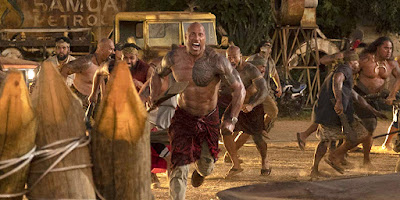 Part of the reason why the FAST & FURIOUS franchise works is because as crazy as the films get, the tone is consistent. It’s not trying to laugh at itself, it doesn’t indulge in grating SHARKNADO levels of self-parody and its expansive almost Robert Altman-esque cast of characters insures we won’t hanging around any of these one-dimensional characters for very long. HOBBS & SHAW is tonally inconsistent. There’s something inharmonious about following up scenes of large men pointing at each other’s dicks and laughing as all the elephants at the San Diego Zoo are electrocuted (not actually a scene, but I’m hoping it appears in the sequel) with the cheesy earnestness of the FAST & FURIOUS’ “When You’re Here You’re Family” platitudes. The smaller cast also means we’re spending more time with the characters which seems like fun at first, but after twenty minutes you realize you would get a similar but more enjoyable experience by listening to "Shut Up, Little Man" over a loop of the Hindenburg exploding. I wouldn’t say that watching a movie like HOBBS & SHAW is like eating icing straight from the tube, mainly because it’s more like eating icing straight off the fist of someone who’s repeatedly punching you in the mouth. Which is to say it’s punishing, but not completely terrible.
Posted by Shock Cinema (Steven Puchalski) at 4:59 PM

So you liked the movie!

Hello! I also have interest in this. My search for this is finally over! Could be explaining a whole lot more on this!

Our jquery development can assist you with your web site.

We had much experience with pigsa treatment!